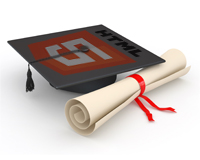 Front-end HTML5 developers have a lot to learn in order to build high-end HTML5 applications, and the learning process can quickly become overwhelming if not tackled the right way.

From a conceptual point of view, here are the 11 important HTML5 concepts that a good HTML5 front-end developer should understand:

Understand that HTML5 is HTML and that the same application model is applicable. So, no new magical development paradigm was brought with HTML5 (outside of Canvas/WebGL, which is totally new), it’s just that the browsers are more robust, much faster, and more capable.

The real HTML5 benefit is the momentum it managed to create among the top browser providers (Mozilla, Google, Apple, and Microsoft) that now compete on compliance and performance on a single specification and that alone create a huge set of long-term opportunities for developers.

2) Touch and Mouse should not require two different frameworks

Understand that while HTML5 applications might need different façades for type of devices (Mobile Phone, Tablet, or PC) devices, the point of bifurcation should NOT be at the tech stack (i.e. framework or library) level but rather at the application level.

HTML5 developers should use HTML5 frameworks and libraries that are designed to run on both Touch and Mouse devices, and they must make the appropriate user interface optimization (UI) optimization at the application layer.

Backbone, Brite, Angular.js, jQuery core, Twitter/Bootstrap, and many templating engines obey this non-device-specific HTML5 framework or library approach, and developers should evaluate those rather than lock their applications to particular device types because of their framework choices (e.g., Sencha Touch vs Sencha Ext or jQueryMobile vs jQueryUI).

From our experience, the right split is not between Touch and Mouse devices but rather between Mobile Phone and Tablet/PC, as the latter category shares more or less the same form factor. The application will have to handle Touch and Keyboard/Mouse for Tablet and PC, but this can be easily handled by the same application and should not require a different tech-stack. Therefore, Mobile or Touch-centric frameworks do not really make sense in a real HTML5 application scenario, as you would often want your next-generation Tablet Web application to also be your PC Web one (at least, you do not want your framework to tell you this cannot be done).

3) Pros and cons of JS vs. CSS3 animation

Understand the pros/cons of CSS animations vs. JavaScript ones. The pros of CSS transition are that it is easier for browsers to optimize them; Safari on Mobile/PC and Chrome on PC even enable hardware (GPU) optimization. The cons are that CSS transitions do not work on older browsers (Internet Explorer, or IE, 7 & 8) and do not offer many controls (i.e., can't really stop them, and curve path are very hard to do when they are supported).

Understand the benefits and the "why" of the Web Workers and asynchronous javascript programming. In short, it's a way to do multi-threaded work in a single-threaded environment. Before HTML5, the only way was with Ajax, and thus including a server in the picture, now, with Web Workers, it can just be all local.

Understand the Canvas vs. SVG. This one is a tricky one, as there is a lot of "social-engineering" baggage behind the technical aspects. On the technical side, SVG is a DOM approach to vector graphics (and consequently a retained mode), whereas Canvas is a programmatic and immediate-mode approach. The catch is that sometimes it seems Canvas gets a little bit more "love" from the browser vendor developers, as SVG has always had a love-hate relationship with HTML from its beginning.

6) JavaScript is object-oriented and a robust language

Understand that JavaScript is a robust and object-oriented (albeit prototype-based) of a language and that there is no need to have some meta-language to do good object-oriented programming (OO) in JavaScript. See JavaScript for HTML5 Applications for more some code examples.

Understand that many of the effects in CSS3 are available in IE7 & IE8 with proprietary Microsoft CSS attributes (rounded corners being the main exception). So, if a customer or manager wants to do a HTML5-looking app in IE7+, it is totally possible by using the MS/IE7 old CSS properties and JavaScript animation lib such as jQuery animate. Obviously, this will add some development time to the project, but for a well-architected HTML5 application, this can be done using the same application with an extra 10% to 20% of work.

8) The power of HTML/CSS simplicity

Understand that the power of HTML and CSS for good element layout and styling is in its simplicity. Twitter/Bootstrap is a great (and probably the best) example of this. Combine simple HTML structure with simple CSS classes, and you can get some great reusable UI elements.

SASS or LESSCSS (used in Bootstrap) are also great tools that bring componentization to CSS, thus allowing for clean and simple HTML/CSS application code, which, in turn, facilitates customization and performance optimization.

On the other hand, many frameworks such as jQueryUI, jQueryMobile, SenchaTouch, and Sencha that provide a heavy abstraction between the developer code and what the browser “sees” often end up in application code that is much harder to customize and optimize. In other words, developers should not be afraid to code HTML/CSS as well as code pure JavaScript.

Following on point #8, understand that decoupling UI layout/style from behavior (i.e. JS) brings a great deal of performance and flexibility.

This approach allows you to take full advantage of the browser’s ever faster rendering time performance as well as its delegation model by allowing lightweight DOM elements to be rendered in bulk and activated only when the user interacts with them (using delegation and such event models).

This could also be described as the Twitter/Bootstrap way vs. the Sencha one. The former has a great decoupling between the HTML/CSS code and the JavaScript (which is not needed to get the layout/style), and the latter, Sencha, combines everything into a foreign all-in-one component UI and OO language.

In other words, a good understanding and control of the HTML/CSS and the associated JavaScript logic makes the application code more flexible, future proof, customizable, and "optimizable."

10) Understanding the need of a MVC

Web application developers (not Web page developers) must have a good understanding of the principle and benefits of a Model-View-Controller (MVC) architecture.

In short, building any type of application, desktop, native, Web 1.0, Ajax, or HTML5 always requires a good partitioning of the data and the views. The two need to be integrated but kept independent at the same time. The architecture and pattern that allow this to be accomplished is often referred to as MVC.

11) Understanding the benefits of a DOM-centric MVC approach

Okay, this is an architecture approach based more on our experience than on fact, but I think that to develop a high-end and scalable HTML5 application, developers do not need to (and actually should not) bring the full desktop/native/widget-centric MVC patterns to the DOM, but rather they should start from the DOM and see what is missing to have a strong MVC in the DOM way.

So, here it is—a quick view of some important HTML5 concepts for front-end HTML5 application developers to understand (or even to disagree with).