For better or worse, I am old enough to remember the bugzilla days. Days when we had to do obscure trigonometry between severity and priority to understand which issue should come first; days when only the nerdiest of the nerds could make sense of it all, and others had to quietly hide their confusion for fear of being outcast; days when making simple queries was more complex than making complex ones, and days when we convinced ourselves that real software development process required management tools with more knobs than doors, just in case.

Fast forward 20 years, and we now have a slew of new issue-tracking tools with almost as many different approaches, from the king-of-all-knobs, Jira, to the opinionated Pivotal Tracker, to the minimalistic and code-centric GitHub issue-tracking approach.

While the general consensus tends to favor “functionally rich” issue-tracking systems, such as Jira, to manage “real” software projects, our experience shows that what really maximizes the traction of a project is how close everybody is to the code rather than how sophisticated the project management tool is. In fact, we found that choosing a simpler but more integrated tool, such as Github, with a well-thought-out set of best practices can be a robust platform for a highly effective agile development.

Rather than going too much into the theory, here is our 100% Github-based agile development process.

First, no matter the agile development process used (e.g., Scrum or Kanban), any software project has to have a plan (i.e., a roadmap) composed of a set of sequential milestones, usually defined by the business and product stakeholders, and some code deliveries, referred to in this article as “drops,” that partially or completely match an upcoming milestone.

For a simple project, the base process will look like this:

In short, milestones represent the “what & when” defined by the business side, and drops are the code deliveries produced by engineering toward a milestone.

Here are a couple of important points about drops.

First, a drop is a build, but not all builds are drops, as builds tend to be generated daily or based on some code event such as a commit or pull request, whereas drops have a human decision factor that makes them worthwhile to look at. For example, when a drop is scheduled weekly on Tuesdays, developers will take extra care the day before, raising the drop quality and the effectiveness of its review.

Second, features are not scheduled by drops but prioritized by milestones and progressively implemented in drops. Often, a bigger milestone’s features will be split into smaller incremental tickets that can be delivered gradually, giving the engineering an opportunity to better manage the complexity and giving the product team a better appreciation of the cost of a feature and its possible tradeoff. The end result of this approach is better collective learning about the overall team velocity rather than over-planning of a single link of the chain.

Note 1) We like to use the term “ticket” rather than “issue” because it is a more general and positive description of a unit of work.

Note 2) While the dot versioning might sound old-fashioned and not sprint friendly, it is actually a very logical and natural nomenclature that both business and product teams can relate to, and this in itself has high value.

In an SAAS/cloud application scenario, we keep a “master” branch at “prod + 1” from production where “prod” is what is deployed in production. This is a great forcing factor to keep the master branch clean and conservative, as it should be.

As the product and team mature, the need for different tracks will emerge, especially when anticipating some patch releases. In this case, we keep the master branch as the “prod + 1” branch, which will be for the patch releases, and create future or feature branches that will have their own sequential numbers. 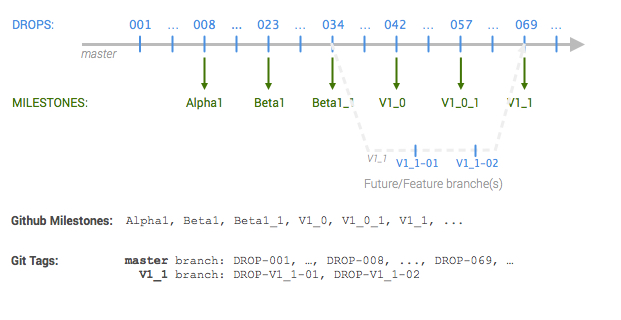 To keep everything neat and organized, all drop numbers are padded consistently, and each drop gets tagged with the branch name when not master branch. Regularly merging the “parent branch” to the future/feature branch is a simple way to avoid branch drifting, which can quickly become unproductive. Most of the time, the parent branch will be master, but with a bigger team, a “feature branch” can “inherit” a “future” branch. One rule of thumb with Git is that it is often better to branch earlier—in the case of optional features, for example—and merge later, rather than trying to split things after the fact.

Note 1) We usually pad the master branch drop number by three (e.g., 002 or 045) and the feature or future branch by two (which is plenty given their short lifespan).

Now that the tracks are set, the next step is to define how the work units roll onto them, and this is where the Github label system really shines.

An important nuance of this workflow is that it is mostly label driven rather than “field” driven like other issue tracking systems. While this might sound insignificant at first, with Github’s great label implementations and a little bit of discipline, this minimalistic approach scales very well with the project and team.

For example, at BriteSnow, we usually start projects with the following categorized labels: 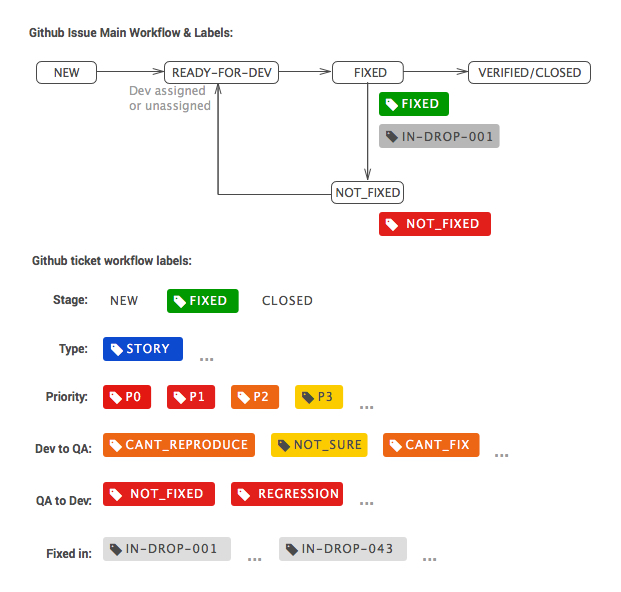 Some labels reflect tickets’ properties, such as the priority labels, while others are flow centric, such as the Dev to QA and QA to Dev ones, and as the project and team mature, we will add more labels and even categories as needed.

So, what makes Github labels so great?

After all, most issue tracking systems have some sort of label support as well. The key difference is that most issue tracking systems have implemented labels as an afterthought or a minor side feature, as most of the ticket states are managed by many custom fields (aka knobs). However, Github’s minimalistic three-knob approach (i.e., Assignee, Milestone, and Label) has been a forceful factor in making labels the mother of all knobs, and consequently it is very efficient and pervasive throughout the application.

Here are some of the specifics of what make Github labels so great:

The point is not to picture Github as the perfect end-all-be-all tool, but rather its robust label implementation lends itself well to building a simple and scalable label-driven workflow.

Note 1) For priorities, we usually use the following nomenclature: P0 = Blocker, P1 = Must have, P2 = Should have, P3 = Nice to have. Tickets without priorities will be done as time allows.

Note 2) We also like to keep track of when a ticket has supposedly been fixed (this will be set by the developers), as in an “IN-DROP-….” tag following the tagging nomenclature.

There is one pitfall in Github’s label implementation, which can be frustrating at times. Somehow, the Github development team decides to tie issue-tracking privileges (such as assigning/removing labels) with the git repository read and write ones, and as a result requires push privilege to assign/remove labels. While this might not be a big problem for many development teams, in our case, it does add a little bit of friction as we like to grant the push privilege to the master repository only to the dev lead(s).

This issue is not strictly blocking for us, and Github’s benefits still outweigh this inconvenience; however, I really hope that Github will decouple those privileges as, in my experience, they are completely unrelated. One of Github’s “recommended” workarounds is to create a separate repository for issue tracking, but that would remove most if not all of the benefits of a tight source control and issue tracking system.

To summarize, a tool is just a mean and not a goal, and our experienced shown us that simpler tooling helps keep everybody outcome centric rather than tool centric. Endless tooling discussions in development meetings (.e.g., priority vs severity) are usually symptoms of tooling over-heating and the best way to cool the system down is to get back to the strict minimum and grow organically from there.

That being said, it is definitely possible to use Jira the “simple way,” (as we do with some of our clients), it just takes some extra discipline to resist the temptation to use all of those shiny knobs, and while Github is a great developer tool and a great base code platform, there is definitely room for improvement and extension, especially from a planing and documentation perspective, but this will be the topic for later.

Regardless of the tool used, if there is one thing to remember from this post, it is that the closest everybody is to the code, the more traction a project will get. While it will take a little effort for everybody to adapt to each other’s terminologies and tools at first, once realized, friction will be greatly minimized and throughput maximized.

If you appreciated this article, retweet and share are greatly appreciated.

Here is the full infographic of our github process: 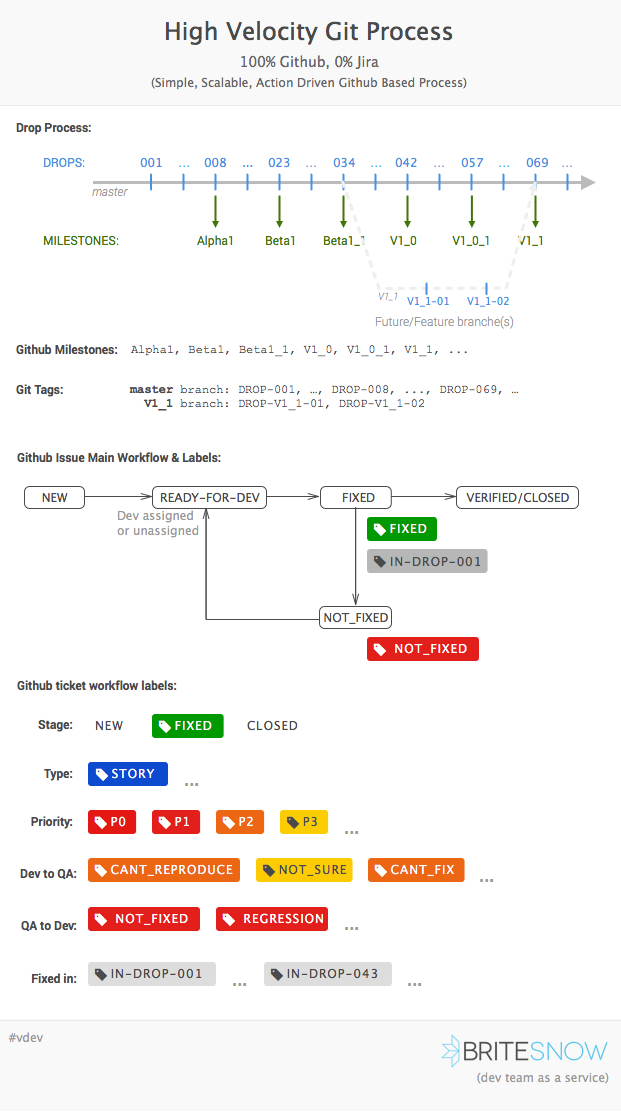